In the world of solar panels and energy production, efficiency is the name of the game. At first, this may not seem like such a big deal.

You may be thinking, efficiency is important, but not that important.

Well, you would be thinking wrong. And its because of this that solar manufacturers around the world are spending billions of USD trying to design more efficient solar systems.

One such design is the solar tracker.

In this article, we will talk about what a solar tracker is, how they work, types of trackers and if the added efficiency, is worth your investment.

What Is A Solar Tracker?

According to Wikipedia, "A solar tracker is a device that orients a payload toward the Sun. Payloads are usually solar panels, parabolic troughs, fresnel reflectors, lenses or the mirrors of a heliostat."

We couldn't have said it better ourselves. You must remember that the suns is constantly moving. Normal solar panels without the trackers miss out on a lot of irradiation opportunities.

So in a nutshell, a solar tracker is a device that detects and follows the sun’s azimuth as it moves across our sky. Combining the solar trackers with solar panels lets the panels track and follow the sun allowing more renewable energy production in the process. 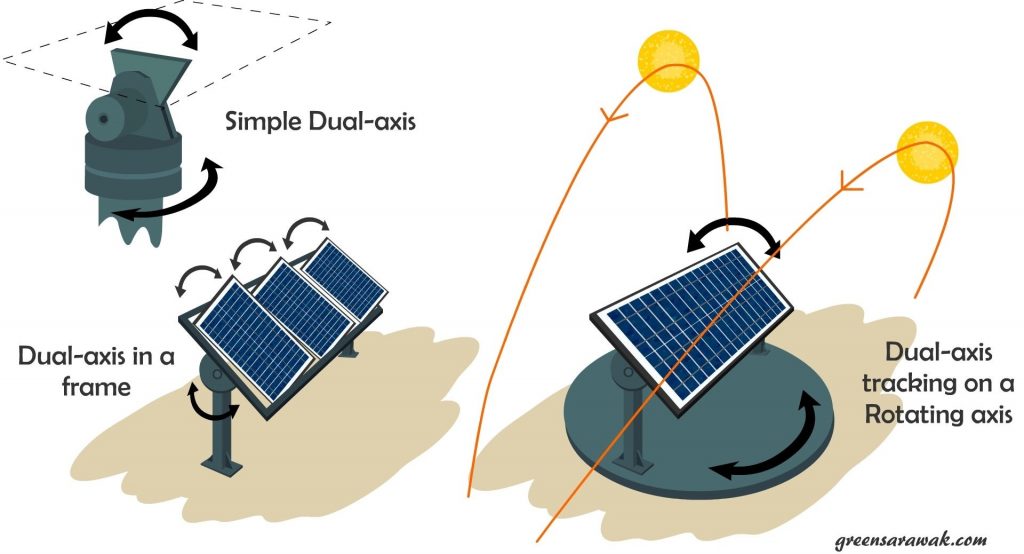 How Do Solar Trackers Work?

There are currently two popular solar tracker options available on the market, the single and dual-axis solar trackers.

You also have manual and passive trackers. However, in this article we will not speak more in depth on these types as they are not really practical.

Put simply, single-axis solar trackers track the sun from sunrise until sunset, rotating on a single point. In this scenario, your your solar panel rotation could be along either the X or Y-axis.

Then you have dual-axis trackers which rotate on both the X and Y axis, making your solar panels track the sun directly.

Are Solar Trackers Worth The Investment?

This depends on which type of solar tracker you are looking at buying. However, the numbers aren’t that far from one another.

Climatebiz made a great comparison study on whether solar panel trackers are worth your investment or not.

Remember though, that it all depends on your location.

The biggest difference between these two types of racking systems is their ability to move, the actual solar technology is identical.

In saying this, as mentioned above, you could come to expect varying levels of equipment costs.

The main differences between the two systems are the following:

Sun tracking solar panels are mounted on a device that detects and follows the sun’s azimuth as it moves across our sky. In doing so, the panel is able to follow the suns movements and produce the most amount of energy possible.

Fixed-tilt racking systems on the other hand are exactly as the name implies, fixed. This means they do not move but instead stand fixed in one directed at a specific tilt angle.

These types of systems are definitely more popular than solar trackers, mainly for ease of installation, but more importantly, they are cheaper and able to be installed on your homes roof.

Whereas solar trackers need sufficient land area in order to be installed, a luxury many home owners don't have.

The graph below shows you when each type of system is able to convert the sun irradiation into energy. 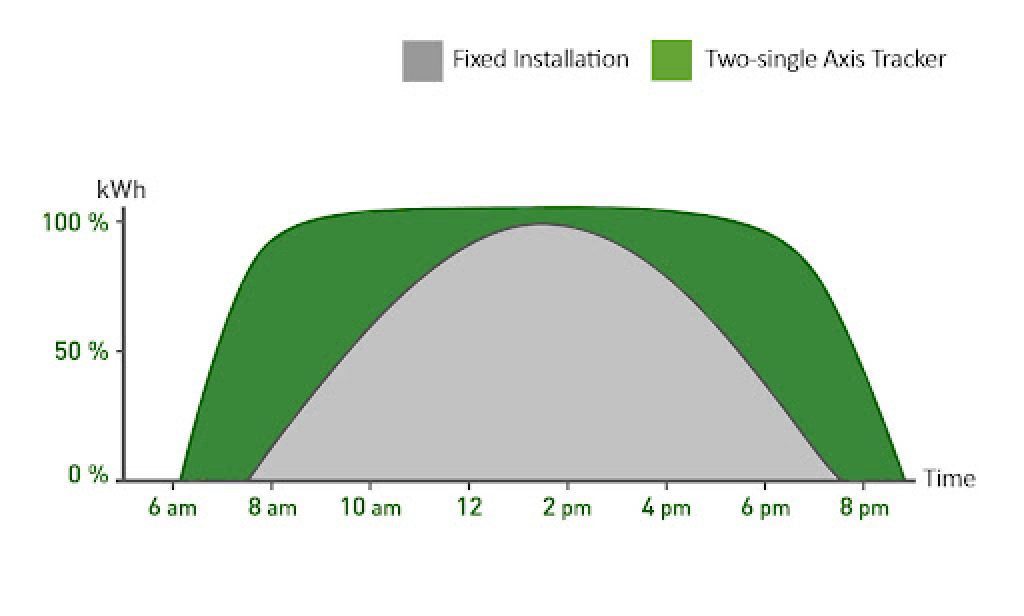 As you can see from the graph above, the time frame for solar capture is greatly increased when using a sun tracking solar system.

Solar trackers are great innovations, and are capable of bringing the most out of standard solar panel technology.

They are more commonly used by utilities if there are area constraints. The extra efficiency allows for less required installation area.

The feasibility of this technology has been evaluated, particularly in a residential setup. It has since been found that most of the time, these types of solar systems are not really worth it.

Mechanical systems with more moving parts tend to be more expensive, and also require more maintenance. While it is true that these types of systems produce more electricity, standalone systems are cheaper when looking at their $ per watt produced.

Additionally, the cost of standard solar panels are falling quicker than that of solar tracking technology.

You may come to find that single-axis solar trackers will eventually experience a payback. However, this is only true should you have enough panels on the axle.